To Meme or Not to Meme

A simple image, a little text, and you get instant virality. What’s not to love? Memes are lightning-fast pop-culture connections we create and share online, perfect for today’s internet culture. Perhaps that’s why they’re so ubiquitous.

Should you consider using memes in your social media campaigns? Once again we’re going to take a firm position of “YES.” Guest writer Missie Frandsen tells us why:

Who doesn’t love a good meme? Office Space memes are hilarious, the absurdity of The Most Interesting Man In The World’ is classic, and ‘Business Cat’ is adorable.

Memes are funny, clever and  easy to share. You probably chuckle at a few memes a week, post them on Facebook or forward ‘Grumpy Cat’ to your colleagues (Mondays are terrible!) but if you’re not looking at memes like a goldmine of marketing potential, you’re memeing wrong. Memes are marketing treasure, a chance for your firm to jump on trending content and show off your personality and likeability. But what is a meme, exactly? And how can you use the popularity of memes like Ryan Gosling’s ‘Hey Girl’, or clever Some eCards to your firm’s advantage?

‘Meme’ (pronounced “meem”, rhyming with “team”) was coined by evolutionary biologist Richard Dawkins in 1976 to describe how an idea, behavior or style spreads within cultures, such as clothing fashions, religions, or popular jingles. At the time, Dawkin’s didn’t intend to father an Internet craze, but the meaning has since been hijacked by Internet users to embody such masterpieces as ‘Bad Luck Brian’, ‘One Does Not Simply’, and Rage Comics. Now, a meme is “an activity, concept, catchphrase or piece of media which spreads, often as mimicry, from person to person via the Internet.” Author Susan Blackmore takes the definition one step further, arguing that current Internet memes are a subset of Dawkins’ original memes, now called “temes”; cultural artifacts that exist in technology instead of the human mind.

Why You Should Use Memes

How To Use Memes

1) Know your target audience. Does your audience share certain interests? Are they internet savvy? What will your audience find humorous? Will they be able to relate to your meme?

2) Start by using existing memes. Piggybacking off of the success of popular memes is called memejacking. This infuses your band into trending content.

3) Choose trending memes. No one uses lolcats anymore. It’s 2015, times have changed. Find trending memes on Reddit or Know Your Meme, and pay attention to Internet culture to keep up on what’s popular.

4) Understand the meme. Look into the meaning and history of popular memes using websites like Know Your Meme, which documents the origin, meaning and spread of viral content. Is the original meme appropriate for professional use? Avoid memes that rely on irrelevant or tasteless humor.

5) Tie it into your brand. Memes should be memorable and link back to your firm, so when people remember the meme, they remember you. An excellent example is Virgin Media using the meme ‘Success Kid’. The photo of a baby with a smug expression has been memed to designate success. Virgin Mobile used it perfectly, embodying the original sentiment of achievement. Nice work, Virgin. 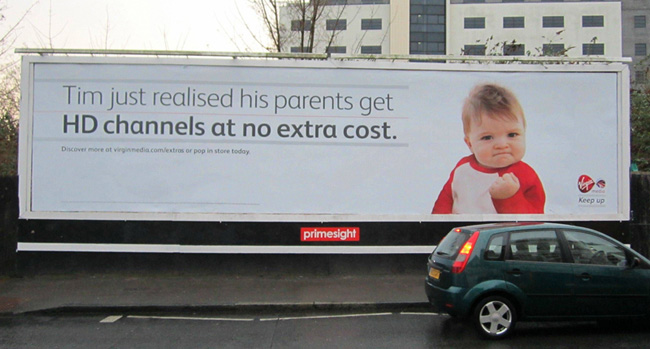 6) Move quickly. You can’t predict the lifespan of a meme. Some memes can last for years, others just a few days. Jump on a new meme as soon as possible.

Follow these easy steps to creating and sharing memes, and you’ll be trending in no time!