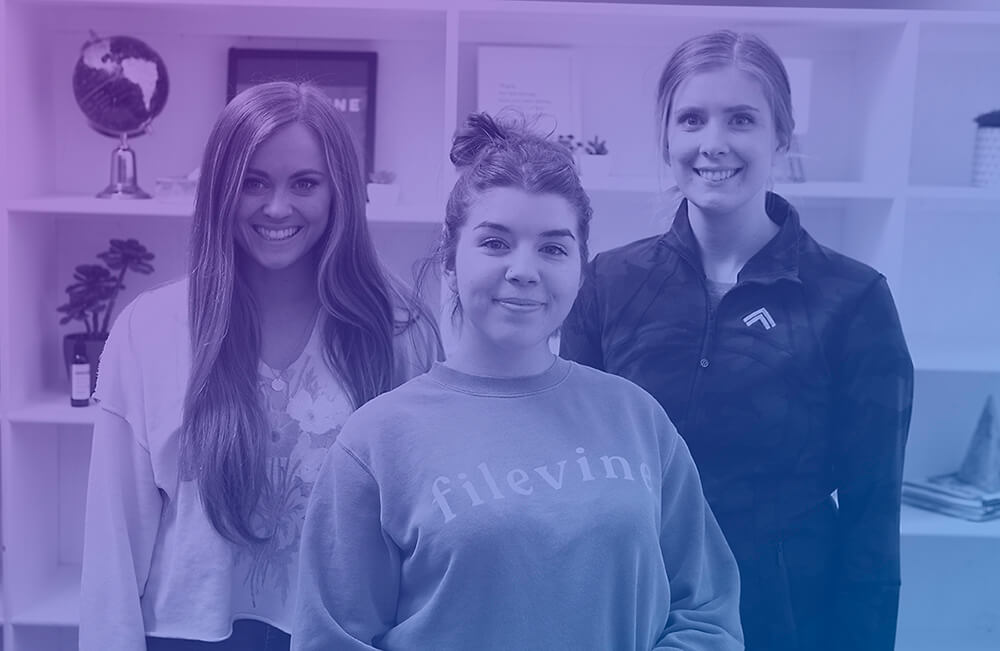 March 8th is International Women’s Day. It’s a day to reflect on how far we’ve come—and how far we have yet to go.

The latest statistics show that women only hold 25% of all tech jobs. This is actually lower than the percentage held by women in the 1980s. The numbers are even worse for women of color. Just 3% of computing-related jobs are held by African-American women, 6% by Asian women, and 2% by Hispanic women.

Filevine is dedicated to celebrating women’s achievements, challenging bias, and continuing to fight for a more gender-equal world—especially in business.

Today, we want to celebrate and elevate women’s voices and empower more women with actionable advice for professional success. I spoke with some of my heroes at Filevine about the lessons they’ve learned as women in the legal tech industry. Here are the invaluable lessons they taught me:

Lesson #1: What others call weakness might be your strength

I was once told by a VP that I was nurturing, motherly, and creative. He said my focus was on helping my employees to think outside the box and become aware of how to solve problems without constant supervision.

But this was an explanation for why I was passed over for a promotion I’d worked towards for years. A junior male counterpart received that promotion.

I learned a great deal from this experience. I learned about that workplace, but more importantly, I learned about myself. I was angry, frustrated, and saddened that I wasn’t deemed worthy of advancement. I continued to work, but found myself becoming less and less “talented.” I wasn’t standing out amongst my peers as I once did. It was because I was trying to stifle those traits they said I possessed. I no longer enjoyed my work. I felt unfulfilled, and it showed.

So I shifted my career path to find a position that not only “tolerated” those qualities, but allowed me to embrace and fully realize all of the potential they could bring. Those were not weaknesses to be caged—they were strengths that have since opened many doors for me within my career.

The tech industry as a whole must learn to value the skills and qualities traditionally socialized in women. Until then, I want to give encouragement to others who face the same hurdles. You are unique. This means you can perform in a way that no one else can completely replicate. The traits that some professionals view as weak, feminine, or “emotional” may be your greatest strengths. Instead of hiding them and trying to adopt more “masculine” traits, find a career that allows you to develop, hone, and embrace them.

One of the hardest (and most important) lessons I’ve learned is that being direct does not mean being confrontational. So many of us allow ourselves to be labeled “difficult” “emotional” or “not a team player” and so we retreat. Speak up for yourself, hold others accountable for the words they use, pitch your ideas, defend your stance. These are all critical to career growth and can be done with passion and without anger. Practice this balance.

I work on this balance in my communication at work. I’ve sent my share of angry emails, which I later regret. But I’ve also sent emails where I repress my feelings and ideas too much, failing to state my needs and hold others accountable. My tactical solution is to first write a first draft with the full extent of my anger. It feels good and brings catharsis. But then I edit it before sending, to make sure I communicate clearly and directly, but without annoyance or rage.

Always take a beat. Brené Brown describes calm people as people who can “bring perspective to complicated situations and can feel their feelings without reacting to heightened emotions like fear and anger.” We are all allowed to feel our emotions. Our emotions are valuable. But take a pause before responding and ask yourself “do I have all the information I need to form a response.”

Lesson #3: Own who you are and what you do

Early in my career as a web developer, I was told I had two months left at work. After that, I would be laid off. The weekend after that news, I found myself in the ER being diagnosed with Multiple Sclerosis (MS).

I was angry and I was hurt. The world was out to get me. I just knew it.

Months later and still in the slow recovery process, I realized something important: I am the owner of my career. Before all of this, I had coasted; riding my own success and privilege and letting other people determine how far I could go. No more. MS taught me I don’t have time to wait for someone else to decide to get me where I want to be.

You are the only one who will truly be invested in your career. You have permission to make changes; to go find companies that will allow you to be what you want to be; to ask for raises early and often; to come and to go. The tech industry, particularly, is full of people who are more open; they are risk-takers and willing to jump on opportunities. Find them!

If you’re still waiting for someone else to come through for your career, you may need to reevaluate your strategy. Take care of yourself, help others along the way, and own who you are and what you do.

Lesson #4: Turn your doubt into motivation

I entered the legal tech arena back in 2003 when both legal and tech were more male-dominant industries than they are now. I walked into my first trial as a trial technician and was asked “where’s John?”

This question did not discourage me, it drove me to prove my knowledge and expertise in this industry. And after 3 years of being unstoppable and breaking through barriers, I went to work for one of the largest and most prestigious law firms in the world.

Being the only woman in the room can be intimidating. Being told you don’t fit the mold can be dispiriting. But it can also be exhilarating to subvert people’s expectations. Turn the doubt into action. Turn your passion into an unstoppable drive.

Be confident. Be unstoppable. Be you.

When I was 22, I took over managing my first team. As an Officer in the Air Force, I was sent to be a “Flight Commander” over a group of people as my first assignment.

The group was nearly all male, nearly all older than me, and I couldn’t imagine my arrival being helpful or welcomed. They had real problems I would need to support them through: deployments, loss, divorce, addiction, suicide attempts…

Before this, I’d been worried about beer money and exams. This felt like a terrible mistake.

As my dad helped me move across the country and I lamented my doomed future, he told me, “You can be scared, but you can’t let them know that.” He was right, how could anyone have confidence in me if I didn’t appear to have it in myself?

Whether you are a leader by title or just by example, people are watching your cues.  When you exhibit calm confidence, your team members are more likely to come to you for collaboration, your manager is more likely to give you that special project. And frankly, you’re more likely to believe in yourself.

As important as practicing your “bravery” is establishing a trusted network where you can be 100% vulnerable.  You can feel afraid, but you decide who knows it.

As Franklin P. Jones wrote: “Bravery is not a lack of fear. In fact, while being brave you’re usually at the peak of your fear. Bravery is being the only one who knows you’re afraid.”

Show others something they can feel confident in.

Regardless of where we go, there is an almost unconscious expectation, a role we are pressured to fill. Be ladylike, present as demure and sweet, don’t rock the boat or ruffle any feathers.

I followed those expectations and tried to do just what I was supposed to do. I was a wife, a stay-at-home mother, and a church member. I was so focused on trying to feel how I was expected to feel that it took me years to realize I was miserable.

Fast forward 3 years and life is completely different. I broke with my culture’s expectations—and found my own strength.

I’m so grateful for the time I got to spend being at home with my kids when they were young, and I’m especially grateful for what my time in that phase taught me about living for myself. At the time, I had never had a “real job,” I felt entirely unprepared for the real world, and I knew I wasn’t anything special. Yet there was still this yearning I felt to prove to myself that I could accomplish big things. I wanted to become someone I could be proud of.

One day I took my daughter into the office with me after school. My amazing female CEO came over to talk to us and my daughter was mesmerized. She later asked me, “Is she the boss?” I laughed and said, “Yes, why do you ask?” She looked puzzled and said, “I didn’t know girls could be the boss.” I was shocked. That day changed me. I wanted to be someone my daughter was proud of.

Hard work and success didn’t feel like a chore because I had something to prove. I enjoyed accomplishing things in the workplace, bringing home my own paycheck, and having something to share when I and my kids talked about our day. I’ve found that when you are your own motivation for success, it comes easy and fast.

Two weeks after starting at Filevine, my boss took notice of my almost compulsive need to organize and fix things. This landed me my dream job. After just one year in the industry, I went from an entry-level sales job to Manager of Sales Operations. I am forever grateful to him for seeing past my few years of experience and placing his faith in my abilities.

There is still so much more for me to accomplish, but if it all stopped here that would be OK with me because now I get to tell my daughter that moms can be the boss too. I’m finally someone I can be proud of, but more importantly, I’m someone my kids can be proud of.