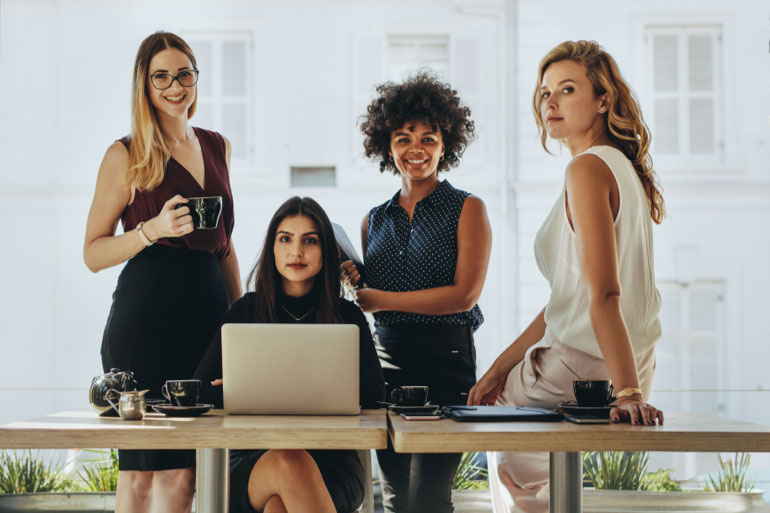 It’s 100 years since we got the right to vote. Law firms can celebrate by making their firms better places for women to work.

Amid all the chaos of 2020, it’s been easy to overlook an important milestone: this year marks the 100th birthday of the 19th Amendment, guaranteeing women the right to vote.

To mark this auspicious anniversary, we could all say some nice things about the women in our firms or organizations. Or, we could go beyond the pleasantries and demand firms implement some tried-and-true methods to improve the well-being of women in the legal industry.

With that in mind, here are 7 ways to make the legal industry a better place for women:

1. Take an honest look at the industry and your firm in particular

We’ve come a long way in the last century (look at us holding property, serving on juries, opening our own bank accounts!). But some statistics can still feel a little dismal.

Here’s a reason to celebrate: women now make up around 50% of the graduating class of law schools in the U.S.

Here’s a reason to worry: nationwide, women make up only around 20% of equity partners.

How does your own firm stack up? Take a serious audit. Who holds top positions? Who gets an interview for new openings? Who gets promoted? Who gets assigned the most lucrative cases? Actually track the numbers.

We already know data analysis is crucial to improve our financial strength. Those same tools can help us meet other equally-important goals in our firm.

Want to show women in your firm that they’re important to you? Keep them informed. Clue them in to the organization’s longer-term goals and the part they play in reaching them.

A recent survey looked at the attitudes of talented, young female lawyers who are planning to leave their firms. 70% of them said they did not understand how their work fit into the larger picture of the organization. They felt left in the dark and out of the loop—unable to see how their work matters.

Obviously, every lawyer’s situation is unique. Pretending there is a one-size-fits-all solution only means falling into damaging stereotypes about who women are and what they want. But there are certain systems which affect a high percentage of women. Outlandish billable-hour expectations might be at the top.

In many firms, the number of hours billed is the primary metric used to determine advancement. Research out of Stanford found that this “disproportionately impacts the retention of women lawyers.”

Part of this is the conflict between the demands of work and family. As Harvard Law School’s Anusia Gillespie wrote, “The average age of a law school graduate is 27. The average path to partnership takes 10 years. Therefore, the investment of time and energy required to rise through the ranks in a private law firm must be made between the approximate ages of 27 and 37.” This is also the time when women are more likely to take maternity leave to have children.

But there are other issues at play. That same Stanford study found that women are more likely to be saddled with extra tasks in the firm, such as mentoring, associate recruitment, or service work. These ‘housekeeping’ tasks within the firm should either be more fairly distributed — or they should be given greater consideration in promotion decisions.

To counteract the pernicious effect of billable hours, women-friendly firms are also adopting more reasonable expectations, along with flat fees and other billing alternatives to create greater flexibility in their workplace.

4. Become a mentor to women

The University of Michigan published a long-term study showing the value of mentorship. New lawyers with mentors had significantly higher levels of success and job satisfaction than those without mentors. And that difference held 40 years after graduating law school. That makes early mentorship one of the most crucial needs in the lives of young lawyers.

Men: don’t just leave this task to women. As mentioned in the point above, women are already expected to dedicate more non-billable time to tasks like mentorship. Also, the ratio is fundamentally unworkable: the small percentage of senior lawyers who are women can’t possibly mentor all the young women lawyers entering the profession.

By mentoring women and non-binary lawyers, men can dramatically shape the legal industry for the decades ahead.

A friend of mine worked for years as a public defender in California. She’s also a black woman. Every time she went through security at the courthouse, she was directed to the slower security line for defendants, rather than the speedy one reserved for lawyers.

The security guards couldn’t understand that a black woman was the defender, not the defendant. Facing a constant barrage of bias, she eventually left the legal field completely.

I thought of her experience when I read this 2019 report by the ABA. It found that 82% of senior women attorneys have been mistaken for a low-level employee at work.

Implicit bias shows up in other ways as well. The report out of Stanford I mentioned before found that gender stereotypes unconsciously shape hiring and promotion decisions in law firms. Here are some consequences of how this shakes out:

Implicit bias warps our view of ourselves and each other. It’s pernicious. But law firms can push back.

To help out, the ABA has put together a set of toolkits for addressing bias in law. They link to the Harvard Implicit Bias Test as well as training videos directed toward the legal industry. These resources begin by creating awareness of what our biases are, so we can move beyond them to create pathways to real equality.

6. Focus on the greater good

Some research suggests women are more likely to leave firms that don’t prioritize public welfare. Women also report less satisfaction in jobs where they don’t believe the lawyers they deal with are highly ethical.

Another survey of women who leave law firm jobs found that most of them didn’t believe their employer cared about making positive social change and didn’t operate in a socially responsible manner.

Creating a strong social mission and recommitting to the ethics of your practice are both ways to encourage women to remain at the firm. To go even further, devote your pro bono work to issues that disproportionately affect women’s lives, such as domestic violence, sex trafficking, and reproductive rights.

A public statement is a small step, but it can help lawyers hold their firms responsible to their stated values.

Earlier this year Filevine signed the ParityPledge. The pledge is a simple commitment to “interview and consider at least one qualified woman for every open role, VP and higher, including the C-Suite and the Board.”

Public statements can seem like lip service. But what’s valuable about the ParityPledge is that it isn’t just a statement of values. It’s a commitment to take a specific action, that will have positive effects for women and the firm as a whole.

These changes can help law firms level the playing field for women. But they can also make the practice of law more rewarding for all lawyers, regardless of their gender. Nobody got into this industry because they wanted to compete in a billable-hour rat-race. Nobody likes operating in a firm without transparency and a shared sense of purpose. What’s good for women lawyers is also just good for lawyers.

As we celebrate a century of voting rights, we’re not going to stop anyone from serving up a cake featuring a portrait of Susan B. Anthony or painting a ‘Notorious RBG’ mural in the lobby. But amid your festivities, don’t let your firm forget the deeper changes needed to create a workplace culture that’s better for all.